A Deep Breath in London

BREATHE Welcome Thank you for coming out tonight Thank you to Tim and Simon for having me Lovely to see you all I’ll just get used to being up here, talk a little about my book, then it’s prosecco time BREATHE My daughter said that as I’ve written a funny book about sex in Italy that I should be able to give a funny talk about sex in Italy. I don’t know that it’s going to be so easy. This is my first published novel and my first book launch, so please excuse my shakiness. BREATHE I’ll speak briefly about three things: confusing the narrator with the author and how not to do this; working with an independent publisher at a time when everybody is writing about vampires or sugar-free erotica; and then I’ll read a little and send you off to have a drink. BREATHE My name is Catherine, I am Australian from Sydney. I ran away to Paris when I was 21 thinking I was Simone de Beauvoir. I WASN’T. I ended up babysitting and writing my first novel above a sweatshop, then hanging out in the square listening to the Congolese ladies, and pushing a pram all the way around Paris so I wouldn’t have to do baby things. I think I was the worst babysitter in the world. I married young and spent the next 15 or so years between Europe and Africa, with nine years in Accra. I don’t talk about any of this in the book. Although it is throughout my book of short stories which is coming out next year, so maybe if we don’t spill too many drinks I’ll be here again next year. 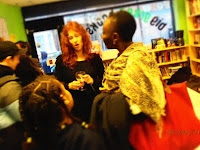 My character in The Divorced Lady’s Companion to Living in Italy is not me at all. The book is written in the first person and my character is called Marilyn Wade. But she has curves AND I DO NOT. She is half-Hungarian and English and I am a total mongrel like most colonial-descended Australians. Like my character, I also lived in Milan for a year and a half BUT I was a young fiancée pretending to teach English, whereas Marilyn is a faded divorcee who has been dumped. BREATHE WHY DOES MARILYN COME TO ITALY TO RESET HER LIFE? There is a rumour in her neighbourhood that a divorced woman called Jean Harper went on a singles tour to South America and met a Milanese solicitor who swept her off her feet. The rumour was that she’d had a love child and had moved to Milan. Marilyn takes off to Milan, leaving her ex-husband with his new lover, her teenagers in school, and starts her kinky transition involving ESPRESSO AND LINGUISTICS. She comes across a cheeky Australian and her virile agronomist lover, a bi-sexual benefactor from Hong Kong who gives her an unlikely job, a Swiss model agency director with an obsession for waif models, a Nigerian immigrant who sells Vietnamese socks. It is a romance for TIRED MOTHERS OR LATE BLOOMERS or people who are curious to see what it’s like to live in today’s Italy – where there are naked dancing girls on television and in parliament, and the country has been turned into a modern day Fellini film by Mr. Berlusconi.

WHY DID I END UP WRITING THIS BOOK AND TELLING THIS STORY? About four years ago I was bogged down in the revisions of a big novel set in Ghana and a friend suggested I write something set in Italy, something funny. I’ve not read many funny books and had hardly read any chick lit at all, but Emily set my wheels turning. I drove back to my place from hers – from Treviso to Albettone about an hour and a half on a white-hot summer morning – and by the time I reached home I had a title and a first line. I set myself up in the chicken shed next to house with my laptop and extension cord, so I couldn’t hear my kids. I wrote until it was too cold to stay outside and I think I was finished by winter. The title and the first line stayed the same. BREATHE WORKING WITH AN INDEPENDENT PUBLISHER AND HOW BLODDY HARD IT IS TO GET PUBLISHED IF YOU DON’T WRITE ABOUT VAMPIRES When I was young I assumed I would burst onto the literary scene and become another Simone de Beauvoir. It didn’t happen, as I told you. So I went to Africa and had babies. BREATHE When I came back to Europe nine years ago I took a while to get back to writing. A novel – even a bad novel – really takes YEARS to produce, then there are years of rejection, depression, divorces, kids, boyfriends AND SKIING LESSONS. When I finished The Divorced Lady’s Companion I thought it would be easier to publish women’s commercial than a literary work, BUT IT WAS JUST AS HARD! Many books in the chick lit category are written ABOUT thirty-year-old career women BY thirty-year-old women with careers. I read a few and couldn’t help thinking that there was a cut-off point in what was being published. There were less stories about over40s – which is when I think things get really challenging. WHAT HAPPENS WHEN THE TODDLERS START GETTING TATTOOS, what happens when you have wrinkles galore, and your prime is behind you rather than stretching out into the sunset? At one point I was thinking of the Eat Pray Love market without the praying and the self-analysis (I saw it in the aeroplane to Australia). I was convinced there would be an interest in an older woman’s story about teenagers, ex-husbands, new lovers and finding A DECENT WAY TO GROW OLDER without resorting to botox or finishing up on an ashram. BREATHE And so I submitted and submitted and submitted.

I was lucky that when I submitted to my publisher they were just starting out with a fiction list after establishing themselves in the poetry field. They were enthusiastic from the start and it’s just like those articles you read – they are warm and friendly and working together has been completely pain-free. Being a smaller company it’s been up to me how much I want to try to market the novel beyond the indie book scene and I’ve tried hard online and hope it brings some results. Independent books don’t always make it into the newspapers, and independent books don’t always make massive sales. And in a market that’s always hungry for the next-best-thing A LOT OF THEM run on love and belief and not economics. I say all this because I want you to think about the people who write, produce and sell ODD REWARDING books that don’t talk about vampires or provide sugar-free erotica. BREATHE 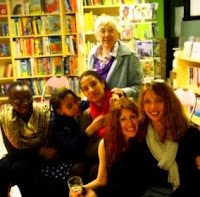 Lastly, DO REMEMBER TO SUPPORT INDEPENDENT BOOKSHOPS! The bookselling industry is changing rapidly at the moment with the expansion of ebook publishing and online book buying. I’m guilty of it too – I live in the Italian countryside and I love receiving my used Amazon books and I have a 10kg luggage limit with Ryan air, so I won’t be bringing many books home with me. But if you’re here tonight you’re probably a book lover anyway so do continue to savour independent bookshops. Hang out in them, order your copies from them. Go inside and order my book! Thank you I’ll now read two short excerpts and then I’ll ask any questions you may have. --- ps: Thank you Downith! AND AN ENORMOUS PROSECCO GRAZIE TO TIM AND SIMON OF THE BIG GREEN BOOKSHOP IN LONDONTOWN!!!
Posted by The Divorced Lady's Companion to Living in Italy at 10:32