A friend of a friend left us two personal invitations at the artists' entrance of La Fenice in Venice for a final rehearsal of La Traviata. To go or not to go? Forty-degree heat, a train trip then a tramp through tourists; dodging, sweating, running over bridges in my suede YSL wedges (thought they needed an outing), and GG my singing daughter who has opera ambitions in a big shades and a Gazel hat wearing more sensible flat sandals.

We made it. Found the door, the cranky woman, our passes, the door after door after door through the back and we were in there, in the cool of the theatre. Breathing the rarefied air of that other world. About to see an opera that was first performed in that same space in 1853.

Sitting inside of La Fenice is like sitting inside a Fabergé egg. Or a French patisserie layered with cakes. The voices thrust out into the golden air and seem to swill in space, layers of sounds perfectly unfolding. It is a small intimate theatre newly rebuilt after being burnt down in 1996, so that it still feels heavily crafted, a little too pink and gold.

Oddly at first, the singers were wearing street clothes so that it looked a Pina Bausch production on the wrong channel. Only the Russian Violetta, dressed in white, was incandescent under the stage lights. The other singers looked like a supermarket crowd suddenly roused to perform a flash mob - à la Verdi. Floral summer dresses, old jeans and t-shirts, interruptions from the conductor who quipped to family members, while the tenor's twins wriggled in front of us and his beautiful wife mouthed the words.

In a word, overwhelming. Even more impressive than when we had tickets and were perched up there with the gods. Along with a bunch of Venetian doyennes who urged my daughter up to the gilded rail between them. Who criticised the Nabucco cast while I thought they had been brilliant. Heavy jewels and bouffant hair. Chanel jackets.

Afterwards, we had beers. Watched the tourists. Toned down after the adrenalin of the performance. I asked GG if she thought she could give it a shot. Music studies, years of being groomed, corrected, realigned; if she could stand up there and give her best.

How magical to think that each one of those unearthly voices belonged to a man or a woman who was once a child, a child with a good voice and edgy hopes, a child buzzing inside with music.
Posted by The Divorced Lady's Companion to Living in Italy at 04:52 6 comments:

At times it seemed as though I were back in the western region of Ghana, listening to the village expire at night. The sky infused with stars, low lights and the occasional sweeping of trees. Bare feet in dust. Siblings speaking instead of spellbound by the TV. The muffled end-of-day speech between man and wife.

Of course we were all in high-tech tents with our phones on roaming and our Chinese-produced camp kitchenware and some people with the luxury of a small fridge.

But it was there at times. The quiet dynamic of village life, so far removed from fences, neighbours, garages, elevators, numbers on doors. Families living alongside one another, in space delineated by nothing more than a line of damp towels. A group of women cooking in the half dark, or a pair of teenagers tramping up to the washrooms afterwards with a tub of dishes. Long table talk into the night, a game of cards, a man snoring on a hammock.

* * *
The sea was a dusty trail away. Green translucent water, a row of yellow buoys to swim towards and back, over and over. A wooden bar for pastis around midday or some chestnut-derived Corsican beer. Crepes for when hunger kicked in somewhere along the afternoon. Rum in my espresso (recommended for the most languid afternoons).

As well as the almond oil I think I polished off four books.

On the ferry back I slept on deck under the massive iron funnel where the wind swept in the night. Storeys of cars and tanned holidaymakers underneath. The hardness already flexing in people's eyes, the idyll over. Back to cities and cars. I burrowed down in my sleeping bag on the bench. Watched the dawn wash over Livorno. Felt degrees of serenity, exhaustion, resolution.

It's going to be a tricky task getting back into work.
Posted by The Divorced Lady's Companion to Living in Italy at 04:59 8 comments:

I can hear the sea. Even here, in the middle of cornfields and vineyards and the quarry over the hill, I am sure that whooshing noise must be the waves caressing my thoughts. Surely? Calling out, Are you ready? Are the headlights still bung? Have you bought that 3kg gas cylinder yet? 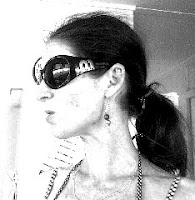 Yeah, surely. And then the waves are sucked out again like my thoughts. I am looking at my feet in sand with that crappy blue nail polish my friend gave me. Waves rippling. Moonlight.

It seems I am ready to cut loose. The edits are nearly over. I've sent on my last chapters and my Ed will send his last whole version which I will - groan - print out and throw into my knapsack. I read there was wifi where we are going. Groan again. I had really wanted to sever ties.

But at least there will be no computer screen for me. I've yet to select my half dozen books. Or heels beyond my sassy espadrilles and a couple of sheer dresses. Along with all those hats.

Friends of mine suggest I will be bedding Corsican men in my tent. Or one of those single dads requiring english translations and a cup of geniune Japanese green tea. I'm not so sure about that. I'm coming down from a long work run and the usual disenchantment with the exes. I need breathing space. I don't need to cascade into something delirious that will knock the wind out of me.

Okay, you win. I'll throw in that black crotchet bikini from Paris, a bottle of rum, some almond massage oil. I wish I didn't know myself so well.

The waves, the waves.
Posted by The Divorced Lady's Companion to Living in Italy at 09:24 9 comments: