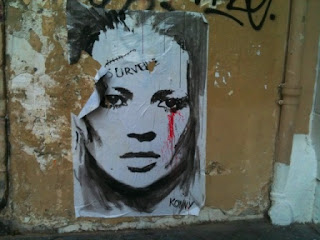 A couple of times I thought I saw her. A skinny thing with cropped hair, rushing somewhere, her dreams in light clouds behind her.

Or her nose in a book in Shakespeare & Co, poring over every word.

Or strutting about, trying to look as though she owned the place.

Ahh, I remember Paris. We all remember Paris. For Paris represents the dreams we all had as young glistening things. Dreams of writing or dancing, of travelling, of lovers. These dreams were the stuff we had in our heads before we had kids and bills, husbands, dogs to vaccinate, homework to supervise, gardens to weed.

Are our kids as hopelessly dreamy as we were? I'm not sure they are. They are hardier, they read less books. And the way they wander into other worlds - it is not through words and books but through the vast and savvy internet, a concept that might have seemed like time travel to those of us who grew up pushing coins into public telephones and making party music mixes on cassettes.


Do you remember cassettes? Yes, cassettes. How about getting the tape caught in a crap recorder and having to reel in the slinky coils of songs. Hoping you didn't lose your David Bowie or Talking Heads.


Ahh, it is good to remember Paris.

I went there as a young thing, a silly au pair in a smelly cul de sac that has become prime real estate now. A posh architect's office downstairs (they are international stars I am told) where before there were Indian sweatshops and a cranky concierge. To think I was living there when Christo covered Pont Neuf in silk cloth. Does anyone remember that? Now, what an event!

It's different now. Pricey. Snooty. Trashy. Vegan. Pricey. Still so much to love. The leafy squares, and picnicking so much in vogue. The ever-cranky waiters and big glass bowls of Belgian Leffe beer. The avenues, though the traffic seems wilder than ever before. The bridges, the sunlit stone bridges. Lovers in your path, thinking they are lost and new. Even those in the cheap hotel room upstairs, a see-sawing screeching of the bed, then those sighs. (How satisfied the young dude seems at breakfast with his many piercings and immense appetite. She doesn't show so I will have to imagine her.)

In the train I meet a beautiful Estonian woman who is thinking of going raw - as in raw food only. In the airport I read the most wonderful stories of James Salter for the very first time.


Posted by The Divorced Lady's Companion to Living in Italy at 11:05 18 comments:

What do you know about sex? You think you know a fair bit? A little here and there? A truck load?

Isabella Rossillini knows heaps. Yes, the Isabella Rossellini. But I never thought I would be sitting in a theatre listening to this glamorous, iconic woman dressed up as a common housefly. Or having her head bitten off by a praying mantis in the act of love.

Friends in Spoleto brought me along to her one-woman (and many fish/insects/birds) show called Green Porno, which you might like to read up about and - if you are lucky - catch a performance. I nearly died laughing. Rossellini spoke in husky Italian from the podium, lecturing in a simple black dress with several strands of pearls (later discarded when she changed into male attire on the stage), while she referred to filmed skits (her acclaimed series on animal sexual habits) on the big screen. These films, researched and directed by IR herself, showed her dressed as insects or animals to demonstrate her arguments - which spanned from hermaphrodites on Noah's Ark to the vaginal passages of ducks.

What? Isabella Rossellini dressed as a duck, enjoying copulation with a her favoured partner? Or, producing a tape

Don't you remember this woman's flawless face - the face of Lancome, the face that was allegedly discarded when she passed the 40 year mark?


Talk about reinvention! This is a woman who has come a long, long way from her glamour puss Lancome days and her heady affair with David Lynch, her stirring role in 'Blue Velvet', the long shadow that her talented and scandalous parents extended over her life. I wondered about this transition, from feted actress to a biology degree and her spoofy child-like films - the lady even showed us photos of her Penis Exhibition in Toronto (if I'm not wrong), where she stood in the midst of a forest of pastel paper sculptures of every manner of penis under the sun.

I wonder how many of us would have been able to transform from ageing actress to serious comedienne, a brave performer with such a cracking idea? Amazing and - somehow - a slap in the face to Lancome and the common belief that a woman's creative life is over once she hits fifty. Not at all - Rossellini, without stepping up on a soapbox, has outpaced that school of thinking in a witty, intelligent and enquiring piece that is absolutely worth seeing.

What was I doing in that neck of the woods? I'd been invited to a friend's art exhibition at the cultural hub of Spoleto, halfway down the Italian peninsula where they have a smashing festival each summer. Umbria. Olive trees and baked stone towns clasping hilltops. So far from the leafy, hazy north. But more on that next week.