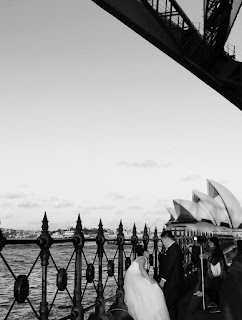 It's been a long while. Unspeakably long. And while I have been catching cheap flights to London pretending to be a writer and swanning up and down the Dolomites in a corduroy skirt, my home city has been growing more and more balmy and glamorous. And glamour is the word that comes to mind when you catch the old bus you used to catch from university to the city. Glamour is the word that forms when you wander around the wintry water's edge watching a freezing Chinese bride on a photo shoot, while on your way to Marina Abramovic's warehouse installation on the revitalised wooden pier.


All of Sydney seems to be about breathing life into old colonial buildings and primping palms along the waterfront. I haven't really wandered around much, but it feels so vivid and bustling and well-nourished and a little dizzying. A friend has already said she's heard Sydney is like a blonde with big tits, but she likes to add a clever blonde with big tits. Her words, not mine!


And then there's the light that has an unhewn, vivid quality, and the sky such a limitless raw blue palette. And have I forgotten the vehement southern trees - all spiky and blue-green? And the cawing birds screeching across the skies? And the water, the intoxicating water of the bay down there, with its clanking moored sailing boats and those glassy villas clutched around every inlet. Such a busy colossal city with its traffic of birds and overhead jets in descent and river ferries cutting the water!


You can tell I've been perving at this city non-stop.

I confess that in all these years I have only written a few stories set in Australia, even though I spent twenty years growing up here. And an age reading and returning to Australian authors, who so often explore the themes of exile and displacement that are dear to me. Take Patrick White, Nobel Prize winner in 1973, whose opus I read almost entirely in my twenties, whose challenging Voss I read a few years back to see how it would play upon my older sentiments. And Christina Stead, whose For Love Alone probably set me off on my journey in the first place. Then there is Shirley Hazzard whose The Transit of Venus I must reread, and Elizabeth Harrower, only just discovered last year, who in The Watch Tower also captured the breezy salty pulse of this harbour.

As I sit here you should hear the birds! Wild things my countrymen will never tame. Last time I remember my mother mentioned a murder that took place in the garage of a building site on the point, and that tale became the Pushcart-nominated story Magaly Park. And this time I have walked more than once past this garage and through the park and around the sandstone point, entering the hyper-reality of the story world I made up; a really strange sensation. I half-expected my two characters - ex-swimming champion Grant and his teasing virgin girlfriend Tai to come slouching along the path. We writers are such scavengers: beware of what you tell us.

Alas! I have just over two more weeks of birdsong and ferries and the smell of eucalypts.
Posted by The Divorced Lady's Companion to Living in Italy at 00:55 15 comments: