Virginia Woolf said that publishing a book was like sending a child into traffic. Here is what I'll be sending into the fray. A preliminary copy came last week. I was so overwhelmed and relieved and emptied out that I put it straight back into the envelope and couldn't look. My son did for me. 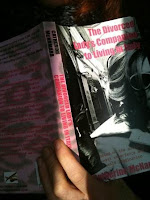 Now I am learning - again - to love that new child. And hold her close.

Before dressing her up warmly and sending her out into the street.
Posted by The Divorced Lady's Companion to Living in Italy at 23:36 20 comments:

Ships in the night

I grew up near the water, sailed a small wooden craft with my brother many a time across the choppy lake of our holidays, water-skied for years, trained and swam in school carnivals as was expected of a Sydney girl, and even now swim laps at the pool because I can't do without it. And yet the water - a grey mass of sea water in the night - still scares me.

I remember the first cruise I went on to the Great Barrier Reef in northern Queensland. Sick as a dog on my bunk downstairs after my new friend and I had a hot chocolate drinking competition from the free machine on deck. Apart from that agony, it was fun. I also think of sailing up the New South Wales coast on my brother's boat, how before dawn the water was traced with phosphorence, where the night before the vessel had bucked and thrashed into monster waves. How fickle, how temperamental the moods of an ocean. I remember the boat sinking into a deep swell off the Heads, not seeing the coast any more for the wall of water, and feeling shit-scared.

This summer, for the first time, I caught one of those huge ferries that traverses the Mediterranean, carrying Italians off to their tanning destinations in Sardinia and Corsica. The coastlines in these areas are truly magnificent, and the sea considerably less almighty than the tossing Pacific. Unlike our sunny day trip out, the return voyage took place at night. Very quickly the aisles and seats downstairs were crammed with sleeping bodies. Kids on beach towels, fathers with mouths open gently snoring, brutally tanned mothers texting girlfriends at home. I left my lot and went up to the deck under the scant summer stars, found a bench under the gigantic funnel with its growl and plume of smoke. It was a long windy night and the ship moved fast, gliding through black water.

The morning after the push to get off-board was ghastly and put me in a foul mood. The fathers now awake, refused to budge in the aisles, and the mothers clutched their possessions and stared. I couldn't find my youngest, our kids were all still asleep on the floor after hours of talking into the night. Adult legs hemmed them off and we were not even docked yet. It became slightly frightening. I don't like crowds or small spaces.

I don't remember any drills on deck, or even thinking about a life jacket.

These days it's no longer a prime news item but every day we are shown footage of the Costa Concordia in its unreal position off the island of Giglio, buffeted by grey waves. Initially, bobbing furniture was bottle-necked between floats and the gaudy carpet was thrown up vertical, but by now all those relics of the tacky mid-winter cruise are gone, and all that remains is an underwater labyrinth of dark holes and surging rank water. It is so awful to look at that tilted silenced world - the podium for the dancing girls, the mega-kitchens awaiting their ghostly chefs.

And now in true contemporary Italian style a blond foreign dancer has been flushed out (close-up of the bag containing her lingerie in a diver's grip on a rubber rescue dinghy), and the cruise ship's captain who claims he 'fell' into a life raft has been named a philanderer, a risk-taker, a show-off.

Doesn't he sound like that short bald guy who sent this country onto the rocks?
Posted by The Divorced Lady's Companion to Living in Italy at 05:49 14 comments: