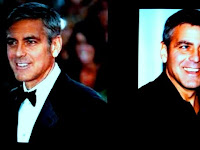 One of the unlikeliest characters in my upcoming novel ‘The Divorced Lady’s Companion to Living in Italy’ is Mr. George Clooney. Mr. Clooney makes several brief appearances in the life of our protagonist, Marilyn Wade, who discovers a signed photograph of the Hollywood actor on the book shelf of her unscrupulous Australian host, Fiona Miller:

"I had no doubt Fiona was a woman who had sex, miles of it. Grimly, I made myself a jam sandwich in the kitchen then took it into the living room where I noticed a signed photograph of George Clooney on a bookshelf stacked with fashion magazines.
George Clooney?
I walked over and it was George Clooney all right. With his crushed black opal eyes and gritted teeth smile. He didn’t look too happy to be spending the night.
‘Hello George,’ I said softly. ‘Nothing planned? Poor old you!’"

"‘And what about that signed George Clooney photo? How on earth did you get that?’ I asked scornfully.
‘What? What has that got to do with anything?’
‘The one on your bookshelf. Where I might add there is hardly a single book.’
‘Last year I went to the première. His translator spilt red wine on my dress and the photo came back with the dry cleaning…’
I had no intention of listening to her anymore. I thought of George Clooney’s clumsy translator and suave George Clooney with his pen poised to sign yet another photograph of himself."

Here I ought to add that I am not a George Clooney fan, unlike a girlfriend of mine who shares his birthday and for a while there was convinced he would come shimmering over to her at a gathering of some foundation he belongs to, with some friend of hers who is a member. Or the ladies at my local post office who, next to the crucifix on the wall, have a giant-sized calendar of Mr. Clooney whose Holiness I check out each time I pay my electricity bill.

The other day however I did see him. A huge spread in the newspaper. George in Venice for the film festival. An intimate shot of George looking out over the Grand Canal in front of San Giorgio Maggiore (where another crucial scene of my novel is set) as though he were thinking of... buying it?

In my book I never say it but I think I ought to say Grazie mille George Clooney. Italy truly adores your smug classiness and you make a great pin-up on certain ladies’ walls.

Oh and just one more reference from our jolly divorcée:

"I sat on a velvet bar stool and ordered the cocktail of the evening, a syrupy Campari with whatever. Within moments it had lined the pit of my stomach like a small animal with a growl.
I looked around, suddenly feeling fantastic. Three grey-haired men in suits were grouped around an attractive woman in a tailored jacket. I realised I had more to show off than what she or poor Jean could afford in a month of weekends in Spain. The men’s eyes drifted my way, and soon enough one of them turned around and took a few steps over to me.
‘Buona sera,’ he smiled, making George Clooney look slightly jaded. My feathers ruffled at the genteel greeting.
‘Good evening,’ I said cheekily in English.
‘Vuole sedersi con noi? Mi chiamo Alessandro. Would you like to join us?’ he added in flawless English. I was introduced to the small party and handed a glass of the robust red wine they were drinking.
Posted by The Divorced Lady's Companion to Living in Italy at 00:33