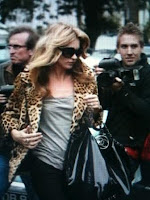 If Kate Moss were to rock over to Milan and start teaching English she’d be apples. But then again, so would Madonna. Or la Signora Beckham. Italians love a foreign star and a foreign star speaking Italian with an accent will soon have a string of television commercials and a talk show. (If I hear George Clooney-in-a-cable-knit say ‘Immagina’ one more time on the Fastweb ad I will die.)

When I was a young thing living in Milano with barely a handle on this vocal language, I had to earn my keep. I set out to teach English. The institute where I worked was on a dodgy street where gorgeous Brazilian transsexuals were earning their keep too. My students included bored bankers and insolent teenagers. A big plus was my boss’s insistence that I speak exclusively in English – what else would I have spoken anyway? And luckily, our textbook was little more than a comic strip with characters buying vegetables and asking for the nearest underground stop. I persevered. I made friends with my colleagues, a Canadian woman whose Sicilian boyfriend beat her up and an upper class Somali girl who had flitted about the world.

In my novel my heroine has moved to Milano and needs a decent job. She turns to the second oldest profession in the book – English teaching. This is where Kate Moss steps in. Marilyn Wade has never taught verbs and participles in her life (like most of us pretenders). Immediately after her interview her boss asks her to step in for Stephen, and tells her the class is on page 27 of the Ranger Series.

‘..you’ll find one on the desk. If not just do conversation. Talk about pop stars and Kate Moss, anyone you can think of.’

‘As I looked over them I realised they were frightfully different from English adolescents. They had not been raised on chips and Tesco Indian dishes and soggy shepherd’s pie. Rather, they ate risotto while sipping merlot and weren’t afraid of carpaccio sitting half alive on their plates. They had probably learnt how to make coffee at the age of five.

The class continued staring until a boy at the back made a comment and they burst out laughing. I stood there detesting every one of them, about to crumble, wishing I had my riding crop in my hand. I took a deep breath and considered walking out the door and never coming back. I still had a job as Brett’s unlikely leather model for the Japanese and Norwegian buyers passing through town. But my children were coming out for Christmas, so I had only a few short weeks left to cobble a life together and look normality in the eye.

As they laughed, I walked around the desk and sat down, closing the textbook and giving it a shove onto the floor. They became silent. I figured I had about thirty seconds to contain their interest.

THANKS TO VANESSA GEBBIE FOR HOSTING ME ON HER SITE. CHECK OUT MY INTERVIEW ON www.morenewsfromvg.blogspot.com

Posted by The Divorced Lady's Companion to Living in Italy at 02:19