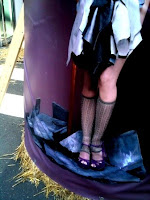 We went to Paris. We were chic. Our dreams were sweet. Our meals were of the most nourishing calibre. At night we met old friends outside metro stops and wandered along footpaths bumping shoulders. We stole a taxi from an angry man. We had long baths. We walked out of a restaurant with too many guidebook stickers, too many foreigners talking about their European trips. We walked along the gutters. This was the city where we were once young, once so full of dreams we were blinded to most truths.

It was work of course. I was more of a mascot than anything else. The champagne tray gal. The gal who modelled the shoes. The chic skinny thing wearing Ale's dresses while buyers from Japan frowned and sketched and bowed. Many languages were spoken. There were stunning hats. And horses. The theme outside each pavillion was Hicksville and, coming from a country village where the hay lies strapped in massive bales on the clipped gold fields, this was odd, very odd. 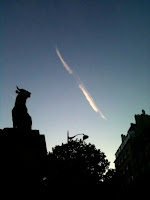 We watched Italy lose the European Cup. Badly. We drank more champagne the day after. In the evenings as the light drew away people had picnic rugs in the parks and we saw bulls in the sky.
Posted by The Divorced Lady's Companion to Living in Italy at 14:20