On Sistabitches and Giving Liz Jones a Hug

I'm not a very huggy person. My kids have been brought up on 'tough love' more than wet kisses so I was surprised when I felt the urge to reach out and give panel journalist Liz Jones a big hug. It's difficult not to write about this bitter, entrapped lady. Poor Liz! Prisoner of her own hunt for good copy, who admitted she once found herself typing copy during an argument, Liz provided an alarming contrast to what was really going on that day. Reading her post-blogfest article, I feel she misread the Mumsnet agenda or - as many have said already - came with her own stereotyped critiques in her Prada handbag. Poor Liz! We don't care for your womb-based comments, and whoever defines themself by their womb? Sending hugs.

It wasn't hard to make a lot of sense out of last Saturday's brilliantly organised Mumsnet Blogfest. I'll admit I was daunted by the mass of women inside the breakfast foyer. Mummy Bloggers - so regularly slammed - were all sipping coffee and making a ladies' racket. I sneaked in, gulped my coffee, tried to get into mingling mode. 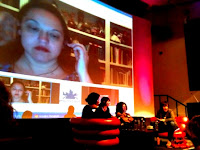 Inside the first speakers revealed just what a diverse bunch women can be. Justine Roberts, Mumsnet co-founder, spoke of the democratic nature of blogging - a 'calibration of voices' - and we were reminded that this booming site has three million visitors a month, with two thousand bloggers enlisted. Next spoke the eloquent Miriam Gonzalez Durantez, a 'politician's wife' who refuses to be defined as such, who runs a household and a law firm. We were then joined by Gaby Woods from The Telegraph, Zoe Williams from The Guardian, the author Rachel Cusk and - in pyjamas 4am Texas time - the entertaining best-seller Jenny Lawson (aka The Bloggess) on the big screen. Talk topics ranged from exploiting home intimacies to dealing with internet trolls. Try following The Bloggess' advice: she simply changes a comment such as 'You should be hung' to 'I want to be in your skin'. Not bad!

I thought the many guises of female fragility often came to the fore. Not wanting to expose your children, while finding relief in shared experiences. Rachel Cusk noted that 'the same candour that enables you to write also ensures you are the most lacerated', having recently produced a book tracing her separation, while Zoe Williams talked about the scariness of the public domain, where trolls are a many-headed and namesless monster. Ideas differed about what to aim for when blogging: ignore sexist labels, write to someone you know, be authentic, practise. Sadly, the discussion touched upon the prevailing misogny that sees much prejudice thrown towards mothers-who-blog - sadly confirmed by (you guessed it) Liz Jones later in the day. 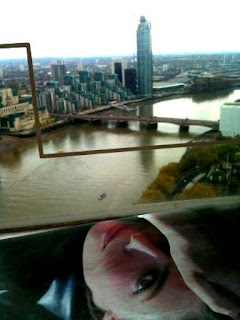 But in the lifts upstairs to the coffee lounge the mood was buoyant and enthusiastic. Views were spectacular and the muffins were divine.

Later, after masses of technical advice from mindshare guru Paul Armstrong (who many would also like to hug) I settled into a series of handpicked talks. I was interested in hearing about bloggers who have gone on to book forms (Cari Rosen and Mme Guillotine) and feature writing (Louise France-The Times). I came away asking myself Why blog? What am I blogging about? and promising myself regular six-month check-ups on blog functionality and blog purpose - instead of just toddling along, snatching topics from my (small) daily universe. Very good to ask oneself these questions, given the resounding reality is that there are so many of us. And what truly makes a great, compelling blog you always have time for?

More ideas from the wonderful Paul Armstrong: Don't write down the first idea - everyone will have thought of that - nor the second, because the smart people will have too. Start with your third idea, there is a chance it might be slightly original.. I loved this tip, don't you?

Lunch anyone? Sumptuous veggies, great talk, not enough divans (cutlery clanging to the wooden floor) and divine lemon cake. I felt the lovely sensation of women treating women - something we domesticated creatures appreciate no end. 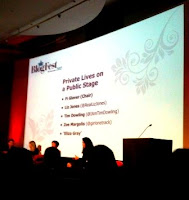 Private Lives was the penultimate talk that filled the lecture hall. I wrote a jumbled live post from my seat on the far right, where I was unable to properly see Liz Jones' glowing tan. Don't mistake my tone for bitchiness - I don't have time for sistabitches - I was genuinely curious to see what this woman whose 'gut-spilling' column I sometimes read was all about. I was also keen to hear Zoe Margolis speak - years back I read her explicit girlwithaonetrackmind blog, enjoying her go-get-em attitude to guys, but on Saturday I wanted to see where all this personal revelation had taken her. Writers are all prone to recounting their lives, but Margolis must have made every date either quaver - or get off - in his shoes.

None of the speakers disappointed, and what I took away was the sense that if you probe your own life for material, you will have to pay. Kids don't like it. Partners will be dismayed, parents will be shocked. Tellingly, moderator Geraldine Bedell asked the tortured Liz Jones, 'Was it worth it?' And hard-working Liz, who has told us of her facelift, her tattoo, her shot letterbox and her randy ex-husband, replied: 'No, none of it.'

The final image I'll be taking home is of wunderkind Caitlin Moran (How To Be A Woman) taking the microphone into her mouth and offering saucy sex to a fan. In that moment I think we were all joined together in hilarious laughter - a bunch of delighted, invigorated women. I loved her advice on how to end an article (or even a book!): Take out your second paragraph, which usually explains all of your ideas, and stick it in! Useful? Next time I'm stuck I might consider it. 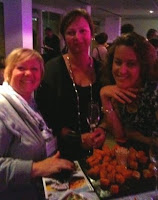 And then it was over. A great day organised by chic and savvy women, a day that wasn't self-congratulory, or smug, or selective, or elitist. And how better to celebrate this wordfest than with cocktails along the riverbank with prosecco and shards of tasty cheese from the excellent British Cheese Board?

Hats off ladies! I'm up for next year.

* * *
The lovely people at expats.blog.com have put up an interview with me do have a look! www.expatsblog.com

Posted by The Divorced Lady's Companion to Living in Italy at 03:15