Blogs come and go, don't they? Sometimes a blogger falls off the screen and you wonder, Did Something Awful Happen? Or did they just grow sick of pumping out words into the crammed and fusty blogosphere?

Sometimes I wonder: Are we just patting each other on the back, handing around the mike at a morning brunch of wives? Or are we doing something grittier - really getting somewhere with our lives? Throwing out concrete suggestions and support that strikes a chord?

I know that as far as writing is concerned I've made some good mates. Upon whom I can count at shaky moments. Who'll forgive me for a bad joke or a slip in taste; a bit of ego rubbing.

Kimberly Sullivan, Rome-based writer whom I met at the Matera Women's Fiction Festival in September, has pinned an Addictive Blogger Award on this blog and I'm rather pleased. I love Kimberly's blog (though it makes me feel like the laziest expat stuck in Italy) and especially her travel posts. They read so well when I'm snuggled up with my iPad.

All I have to do now is tell you Why I Blog and nominate 10 blogs I'm addicted to. 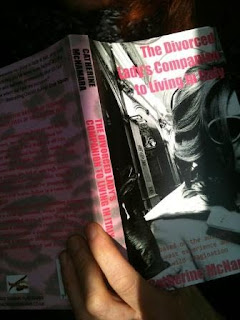 I started this blog a couple of years back when I signed my contract for the publication of The Divorced Lady's Companion to Living in Italy. I was clueless. I wanted to conjure up a voice that spoke of the book, but that also spoke about living in Italy as a well-travelled older female who still cracks jokes that nobody understands. I wanted to talk about books, about publication and promotion, about morale, (even morals!) and as I scroll through my posts I see I have rambled about such rocket-science subjects as cherry picking and being told I was driving with my uterus! (I do also have another, serious blog for my forthcoming, serious book of short stories peltandotherstories, which talks about short stories and living in exile.) Now that the book has been out for six months I'm still clutching to the themes of life as an expat in a rowdy country, raising bi-lingual teens, wearing big hats and playing Scarlatti, and being an accomplished, creative and naughty woman.

Next I have to nominate 10 blogs that have me hooked. This makes me sad. Because I don't read blogs every day. In fact I BAN MYSELF from reading blogs every day as already the washing pile is up to the ceiling and don't ask me for socks. And I know there are many more than 10 that I flit between. Here goes. I won't mention blogs I've already tagged, but if I've missed you out don't be disgruntled. I'm scatty as a snowflake at the moment. Can't even count.

un'americana a roma - Shelley on how to be a sassy Roman
averildean - I adore Averil, and her birthday is the same as mine
downith - the way Downith describes her kids just cripples me!
finding myself in france - a giraffe-eye view of not France but la Suisse
gwenmoss - refined, insightful, soothing
macdougalstreetbaby - creative photographs from a creative powerhouse
postcard pictures - makes this Sydney chick mighty homesick
tania writes - short stories and flash fiction mostly (see also theshortreview.com)
carterlibrary - wisdom, books and gorgeous dogs
thatswhy - Lisa makes me feel we are both such whacko mothers
wayfaring chocolate - Hannah makes me want dahl at 9 in the morning!
whispering gums - WG reviews books the way they should be reviewed

In truth I am addicted to so many blogs, I just don't get around to reading as much as I'd like. And remember my internet connection is slower than that tractor over there.

Oh, all you guys have to do is put up the tag if you like, tell us why you blog and nominate ten more blogs, that way you'll broaden our appreciation of this art form. If not, no worries!
Posted by The Divorced Lady's Companion to Living in Italy at 09:34