Next week this author is running away. Not with Claudia Cardinale. More likely with a suitcase full of copies of her new book. She is going on her annual pilgrimage to Matera in southern Italy, where a wonderful Women's Fiction Festival is organised by a wonderful, hard-working group of people, in a location that is breath-taking.
I'm sure Claudia Cardinale has already been to Matera. She probably filmed a raunchy film there in the late 70s, with her pout and her frown and her bouffant hair, her splendid curves and tight waist, a pair of killer pointy heels.
Well, next week I will be there, probably wearing my stylish Campers (can you see all those stone steps?!) or my new fake Coco Chanel's Grandmère pumps. Heels, mmm, are not recommended (I speak from experience).
I will be joining the Literary Marathon through the lamplit streets of Matera next week, reading an excerpt from this short story from my new collection 'Pelt and Other Stories'. Readers, do what you do best... 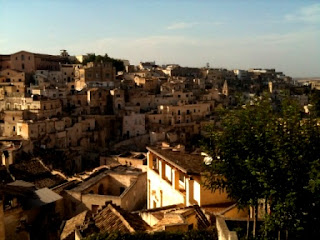 Marina came in when he was eating grapes in front of an old Claudia Cardinale film. Unannounced, since last weekend had ended in a cloud of mutual, unrepenting bad will. Sebastien Tempels wanted to hear how she would get around it.

‘Her breasts look like a pair of Tupperware containers,’ she said as she tossed her bag.

She sat down, taking a sprig of his grapes, staring at the delicate scene of love that he had been waiting for. A glance told him she had been plotting these moments all week. On the screen, Claudia Cardinale’s flesh-coloured lips locked with those of her partner.

He went into the kitchen without speaking. During the week he had gone through vulnerable moods. On a dreadful day he had invited another girl back to his place. She had lain out on the kitchen bench, strumming herself and laughing.

Now tell me if this isn’t something you’ve seen in a second-rate movie, she had said.

It was, he had told her. He’d told her to get down.

He took out a cup and switched on the kettle. The evening light drifted down from a rooftop window onto the lids of things. He took out a second cup resignedly, and the cheap brand of tea he knew would keep him awake for the next few hours. He took a swig of vodka to compensate for it.

That week he had failed a fairly important exam. In essence, it had been about the composition of blood. Sebastien hadn’t been able to access the knowledge he knew his brain was holding from him. He’d accused Marina of pillaging his concentration, but he knew it was his brain that had slammed shut.

He held his mug and thought about the other girl, the one who’d lain back on the kitchen bench the night he’d failed the exam. She followed his course at the university. She was tricky: she slept with one of the female lecturers, it was rumoured, although he hadn’t had the nerve to ask if it were true. The girl was called Caroline. Sebastien, until the moment on the bench, had thought he desired her. When he had told her to get down she’d had a torn look and had asked for a glass of milk.

Sebastien came back out into the low-ceilinged room with the two cups of tea and fairly good intentions. But it was empty and the television was blank.

A year later Marina was hit by a car as she crossed Chausée de Vleurgat at night. She was taken to a nearby hospital to be treated for a deep cut on her chin, where she had received the impact of her fall. She had no other injury apart from bruised, jarred limbs which would pain her for a full week afterwards. She called her father who lived back in Devon and told him that she would be kept under observation in hospital for twenty-four hours. She begged him not to come.

At this stage in her life Marina was alone. She had tried to paint after following a course and for six months or so she had heard herself say she was a painter to people she met for the first time. The thought of this now stung her. Since she had left Sebastien she had applied for a job as a translator and been unsuccessful. Her father was supporting her and she was collecting unemployment benefits from home.

She woke up the first morning after her accident with Sebastien’s face forming in front of hers. A shiver travelled over her body and her vision blurred with tears. She felt a rush of everything she had failed to experience that year, culminate.

When she was released from hospital their story resumed. Their bodies fell into a duel ease that coincidence had blessed.

Marina came to sleep at Sebastien’s each Friday, Saturday and Sunday nights. During the week he worked long, odd hours and told her he didn’t like the idea of someone waiting for him. He earned little money, and what he could spare he was saving for a holiday in Argentina. As far as he was concerned, the question of money hadn’t been resolved between them. Sebastien felt that Marina could have cooked a little, or offered to replace some of the bottles of vodka she guzzled regularly. For when Marina was with him all she could do was admire him from a stool in the kitchen, make cosmetic rearrangements of his possessions, and wait as he did for their inevitable collapse into sex.

‘Oh, this is such a cute little vase! Did you get it at the markets? If you had a pair of them you could put them on the mantelpiece and look entirely Art Deco. Is it Art Deco?’

Sebastien never told Marina about Caroline, the woman he had nearly slept with when he was a student. For him Caroline had provided a small flare when his study was at a critical nexus. He had kicked himself for months afterwards, and gradually he had forgotten the reason why they had never had sex. Then one morning in October, Caroline rang the buzzer downstairs when he was having a second round of coffee. That night in casualty an old, unclaimed woman had grasped him before the life fled out of her. Sebastien’s hands still carried the chill.

They embraced at the door. He brought her into the kitchen and for a time they talked easily.

‘Tell me, Sebastien, last year, why is it that you didn’t want to sleep with me? Why did you back down?’

Sebastien flushed. He’d forgotten the sensation and momentarily followed the flaring capillaries along his skin. The explosion.

‘There was someone else. I’m back with her, actually.’

‘You know that doesn’t count. You knew I had it, didn’t you? You suspected it.’

‘The plague, you fool. I’ve got the damned plague and you’d have it too if you’d been with me.’

He watched her break down. He expected the encounter was the idea of some therapist helping her come to terms with the disease. She left after they had talked about hospitals and where the best treatment was available in Brussels. Sebastien never saw her again.

Thereafter, every time Sebastien entered Marina the shock of this potential collision acted as a charge. It became a part of him, scar tissue webbed on his nerves. The thought that he had not had Caroline Moreau was a sickening impulse he continued to feel first hand. With time, even after he learned that Caroline had been buried in Metz, this feeling neither softened nor went away.


Posted by The Divorced Lady's Companion to Living in Italy at 00:59