Some of you may remember this post. It was a small thing, forgotten after a while, but at the time quite devastating. It made us very upset.

Last week, on the day my book 'Pelt and Other Stories' happened to be coming out, we went to this city. Many of you have probably been there. You may have sat on the steps of the Roman Arena and watched Aida, or Carmen, or Nabucco, operas that are often staged there. You might have seen a contemporary performer like Alicia Keys, while cursing the slippery Roman marble, your wet numb bum and the guy in front with a tartan umbrella. You might have even been married there, like a small woman I once knew, in Juliette's frescoed tomb, with a Shakespearean sonnet read out from nervously held paper.


I'm talking about Verona, a city an hour or so away that I barely know. It is where you go for concerts. It is full of Germans. It is full of that Romeo and Giuletta parlaver. I've been told I'm not romantic.

Once again I left the young soprano at the scrolled doors of an ancient building. We've done a bit of that over the past year. As much as I despise being pointed out, looked at and still sweat when I'm playing for my own piano maestro, my daughter the Young Soprano is at home on the stage, speaks to the audience, reaches unwavering high notes in the same way (seemingly) that she flicks her hair.

I didn't want to transfer my nerves. My dry mouth. My overall confusion masked not-at-all by my stupid conversation.

So I sit for two hours in a bar. I order juice. I order ginseng coffee. I write to an ill friend, trying to send her the beauty of the September light in the piazza, the facade of the church, the hedge of potted plants, my hopefulness. I blab about my book.

We are often told that what happens is what is meant to be, even though the icon of my early adulthood - Simone de Beauvoir - explained that you are responsible for all choices in all corners or your life. Is that so? Are we really steering ourselves towards our destiny? Or is our destiny a collision of forces - as flimsy initially as the dust of this planet sparked to life.

This summer I learnt that Mme. de Beauvoir, whom I always thought was a tower, wept, took valium, raged and suffered with the same nauseous pain as all of us. She threw herself onto Sartre's coffin in the ground, in the end. 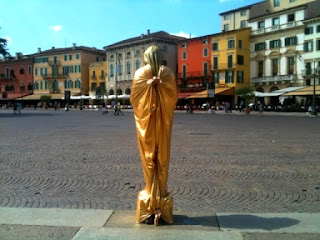 Well, she's in. The Young Soprano was accepted into her course. It's done. Congratulations young lady.
Posted by The Divorced Lady's Companion to Living in Italy at 15:51