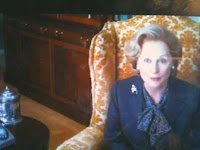 Many odd things happen to foreigners in Italy. People get mugged, fall in love, restore houses, put on weight... Julia Roberts showed us how the blessed among us do it and end up with Javier Bardem on the island of Bali.

But others come to Italy to stay. They set down roots and become part of the local colourful scenery. They are looked upon kindly by neighbours especially with regard to food and fashion and child-rearing (Oh but how can they know? They are foreigners!) Or they are regarded with deep and unfeeling suspicion. I know that when I moved here with my mixed children and mud-splattered car and unruly red hair and, every so often, a wild summer party, my neighbours decided that I was a hippie and a drug addict (WHAAT? HIPPIES DON'T WEAR DIOR). It was even whispered at my kids' school that I had had my four children with four different fathers. Can you imagine dealing with four exes?? Pluh-eeze.

Oddly, this type of judgement sometimes swings the other way. With Meryl Streep portraying the toothy bouffant Iron Lady on international screens and renewed discussion about Britain's now-frail ex-Prime Minister, I feel I must mention that Margaret Thatcher is my neighbour.

On the two hills above where our house lies in a messy valley currently strewn with corn stems and frost, there are two villas. Or, a seventeenth century villa, and a wannabe villa which is a country farmer's pile. In the wannabe villa lives a woman the locals call Margaret Thatcher (Italian pronunciation: Marrgarey Tatchur). True, this signora's red-blond hair is swept up in a now-thinning bouffant, her teeth are dodgy and her smiles are false. Recently bereaved, she drives her boxy sedan like a bat out of hell and will not meet your eyes at the supermarket. Another neighbour at the end of my drive said she has banned her (I don't know under what edict) from hanging her washing on the porch behind her house, because it sullies the ex-PM's view.

Sometimes I think of signora Maggie up there on the hill behind the bright blue shutters of the wannabe villa which are always closed and the big sweeping night light to scare away the Moroccans and the Albanians whom she fears, bitterly hunched at the kitchen stove now that her sons are gone, even the one with the problems in his head, and the years have gathered behind her.
Posted by The Divorced Lady's Companion to Living in Italy at 03:56