In Verona, a divorce

Have you ever been blown away by the timing of events in your life? Last week it was as though the director had shouted through his funnel from his slung canvas chairs, 'Divorce! I said Divorce!'

It seems divorce is the flavour of the day. I am no way advocating it, but seeing as I have a novel coming out dealing with the kinky aftermath of middle age divorce (no sobbing here - just religion, the politics of aging and some well-heeled sex), around the same time that the Italian state has called me up before a judge to nudge along my own divorce, one does wonder about who could be behind this unbidden timeliness.

So just how did my book - 'The Divorced Lady's Companion to Living in Italy' - arrive in my lap a week before we were up before a kindly judge who asked if there were any hope of reconciliation??

The ex and I had excellent Franciacorta in a nearby bar and then spaghetti con le vongole at his mother's. It's paperwork now. Being older has a type of grace and conclusions can feel neat and warming. 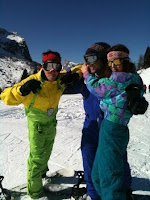 It goes without saying that Carnivale came and went. After two weeks of diesel-freezing minus twenty degrees we had many beery days of kinder weather on the slopes, faces tanned and beanies left in the car. It's almost beachy up there now and the season has quickly frazzled. Though not for these nameless eighties swingers.
Posted by The Divorced Lady's Companion to Living in Italy at 03:03