I drove through the hills with an old lover the other afternoon. I know we were both thinking of summer nights under the grapevines, the smell of summer air, summer skin. That day it was foggy and cold and we drove swiftly, but there was mischief and memory in the air. 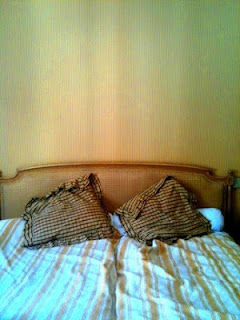 I love stories. What happens to people, how their lives unfold and what steers them through their both their bold and minor choices. I love plot lines, unexpected turns, stunning outcomes. I love the reduction of a big tale to a few simply driven lines.

The other week I read a film brief about a new film starring Naomi Watts,set in Australia, and taken from a Doris Lessing novella. Interesting. I saw the stills and cringed a little. It's called 'Two Mothers' and tells the story of two utterly best mates who have love affairs with each other's sons. There are glittery sea shots, clasped bodies in beds with gentle tans and rude biceps.

Of course the hook is: Could You? Would You? Would you ever dream of bedding your best mate's kid? A boy you've seen at every stage of growth. Baby, toddler, skinny kid, pimply teen, cheeky thing, young spruced-up sexually awakening man?

And then of course you're meant to run through the offspring of your best mates. That one - well, he is cute. That one - never! While alternately thinking of your own sons in bed - whaat! - stroking one of your 40+ girlfriends.

The few film reviews I read state that these affairs were lengthy - spanning years - until they were terminated by the mothers in 'respectable' old age. 'Respectable'? It's not that I'm a prude or shy from age-gap relationships, and everyone knows that love is chemical and grabs you by the throat...

I haven't read Doris Lessing's book of four novellas - 'The Grandmothers' - from which the novella is taken. But I will be ordering it when I finish this post. Like many of us I read 'The Grass is Singing' and 'The Golden Notebook' as a young woman but haven't read much Lessing since. Now I want to bypass what Hollywood has squeezed from this story (which will doubtlessly be elegantly produced, and probably quite a turn-on) and go back to the source. Doris Lessing's words. The compulsions of these people. The context.

Already an old review of the story from The Guardian calls the set-up a 'cankerous self-indulgence rather than a daring liberation' and I wonder if Hollywood will pick up upon these degrees of self-delusion. Or what Lessing herself - an eighty-year-old master - writes,

'These lives were easy. Not many people in the world have lives so pleasant, unproblematical, unreflecting; no one in these blessed coasts lay awake and wept for their sins, or for money, let alone for food.'

Far more intriguing this, no? Than the illicit being given such grace.

Posted by The Divorced Lady's Companion to Living in Italy at 01:21