The Origins of Prejudice

A fairly small thing happened this week. Plus another one the week before. Now as the snow has knitted a thick coat over the fields out the window and I read that 76-year-old Silvio Berlusconi has a new 27-year-old squeeze (founder of the Silvio, We Miss You group, as in Silvio, Buy Me A Rack and Put Me in the Newspapers!), I have been thinking it over. 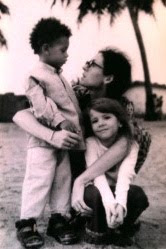 I remember reading in a junk magazine that Heidi Klum, mother of mixed-race kids, hated her family being called something like a rainbow tribe. I can feel that. What is so intimate - your family life, your squabbles at the table, queues for the bathroom - being labelled in such external and political terms. It's something that feels so invasive, it smacks of tokenism, and I don't like it. Kids don't need that type of baggage and the thinking that goes with it.

That's not exactly what this post is meant to be about. But it is about baggage. My mixed-race fourth child has always been as cute as they come but now is becoming gangly and pimply and adolescent. As a kid, he hated people touching his crimped hair (why do people think they can reach across and touch a child's head? Is that not a type of violation?) and this has been shaped by a couple of incidents (comments by kids who perhaps hear this type of talk at the kitchen table??) into a form of acute awareness, a sixth sense that sometimes verges on anger. He gets pissed off. A kid who joked 'Shut up, you're black' was almost punched. My view has always been to sit him down and tell him to be above it. Not to lash out - and yet I understand lashing out too as I have a temper. But this level of discrimination. Needing to lash out once a week, once a day. What does that make one become?

While the PC way of thinking has toned down or removed many innately racist expressions and helped to make people think about the words that come out of their mouths, in Italy you can still call a black person 'negro' and not be shaken down. It's amazing. While 'negro' is close to the word for black 'nero' it is still a jolt to hear.

In Italy migration from Africa is quite recent and has been happening in a haphazard way, Italy providing a softer border than many other European countries. I had to sit my driving exam in our village with a bunch of Senegalese and Chinese who took the piss out of each other's accents. Mind Your Language, Veneto-style. While we are not immigrants as such (though I have met guys who have survived that atrocious boat trip across the Mediterranean), people's views are conditioned by seeing the poor black guys huddled in plastic sheets on those vessels, by the guys begging outside supermarkets, by the petty theft that goes on. And of course by the xenophobic parties that whip up the fervour. 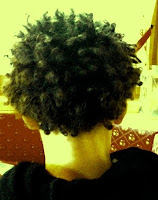 This brings me back to my original point, about the baggage we all carry. My kid. You. Me. We hardly even know it's there, soft and pressing against our views. This is where my kid's baggage starts:

It's easy being black on the bus, he said the other day. Nobody wants to sit next to you.

Or, Today an old lady sat next to me. Then as soon as there was another seat, she moved away.

Both throwaway comments spoken with a half-laugh in the car on the way home. So maddening, such a burden for this young man to carry ahead.

THANK YOU TO ALL WHO VOTED OR COMMENTED FOR THIS BLOG ON THE EXPATSBLOG AS I RECEIVED AN HONOURABLE MENTION!!
Posted by The Divorced Lady's Companion to Living in Italy at 03:08