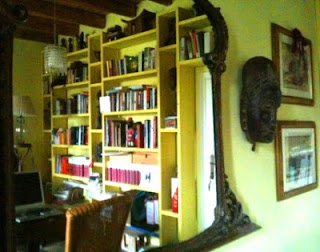 I'm sitting here in my favourite room of the house looking at my bookshelf and about to start raving. This is where my piano is stationed and I have a cabinet full of my favourite Fante horsemen. No children are allowed in and guests only by invitation. I would invite Downith for a chat though - Downith has nominated me for the Alternative Booker Award where I share my five favourite books and pass the baton to five blogger mates. More lovely books to add to all of our lists - some of my newest favourites have been through recommendations on blogs!

My all-time Favourite: Nobel Prize winner Patrick White published Voss in 1957 and I am lucky enough to have a hardback 1st edition US copy. It always sits by my bedside, in the hope that some of his brilliance will cross over into my sub-conscious. No harm in hoping. I read all of White's books in an obsessed flush in my teens and twenties and last year read Voss again to see how my older self would respond. It was just as powerful and mesmerising. Ah! The inelegant German explorer Johann Ulrick Voss sets out to cross the harsh Australian continent in the 1850s, but not before finding his soulmate in the niece of his sponsor, Laura Trevelyan, and examining the plight of man through his exquisite doom. White deftly paints the mores of the early colonial settlement and provides a vision of the unflinching landscape and its stark inhabitants. Not an easy read, but transporting, all-encompassing.

A brilliant book: I ordered The Book of Daniel by E.L. Doctorow because a contemporary author I was reading (Peter Salmon, The Coffee Tale) said it was his favourite book and I was made to feel very ignorant. Another complex read, with shifting narration - a device that served to deepen the characters in a colossal and complex way. The central character made me weep; Doctorow's language is breathtaking. The story of the Rosenbergs might have been told in many ways but the disordered time frame, the change in pace and thrust, and again the monumental language which may irritate you or send you into a drugged trance. I think I will have to reread it.

A contemporary master: I have long loved T.C. Boyle's masterful story-telling skills and swift language, his lingering character studies. Water Music, his account of Scottish explorer Mungo Park's search for the source of the Niger River, overturned my world. Last year I read The Women, his story of the women in Frank Lloyd Wright's life. Each woman represented an architectural phase of the great man's life. From tragedy to ruin, from landscape to creation and back. This is a book to remember from a writer who has bottomless talent and drive.

A political case: It is well-known that Ogoni environmental activist Ken Saro-Wiwa was executed in 1995 by the Abacha government for his protest against the appropriation of the Niger delta by petroleum companies (Shell - don't buy it). But I read Sozaboy without wanting to think of this appalling deed. Sozaboy is an African classic, as widely read as Chinua Achebe's essential Things Fall Apart (which it is time I introduced to my kids). Told in the first person using pidgin, the novel is also called a novel in rotten english, and captures all the immediacy, humour, pathos and injustice of life during the Biafran war in  Nigeria. A powerful and chilling anti-war statement.

A wonderful newbie: I wanted to include Chika Unigwe because she is a writer who is going places. I also picked up word of her novel online and ordered it quickly. On Black Sisters Street tells the stark, cruel story of four exploited African women who are transported to Europe to work in the sex trade in Belgium. The beauty of the book is its failure to brandish these women, or succumb to melancholy or stereotypes. I lived for ten years in West Africa and met many, many strong women. Women whose situations are so different from ours in the West, and yet so fundamentally alike. The wish to live purely, to survive, to raise our children well. **Chika captures this.

Now for five other bloggers who I'll invite to tell us their favourite five:
Kimberley Sullivan
Whispering Gums (I've only mentioned one Australian and only one woman I realise!)
Gwen Moss
Harryipants
Francesca Muir

*Thank you Downith, my mate in London downpours!
**Thank you Chika who generously wrote my cover comment for my next book!
Posted by The Divorced Lady's Companion to Living in Italy at 06:52