Too old to go clubbing? 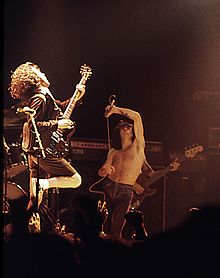 On Sunday morning I woke up with three hard rockers on the pull-out divan in the kitchen. I couldn't even make my cup of morning green tea. (I'm now thinking I should have photographed the little angels.) I stood there thinking, Why do these things happen to me?? Why me?

A few years ago I got talking to a young Italian guy who played in an AC/DC 'tribute' group. Quite a dude. Being the only Australian in the tiny mountain valley where we spend most of the winter, I was seen as a representative of what AC/DC has passed on to the world. What a joke. I was even serenaded at a concert - if you call having Angry Angus circle you with an electric guitar and go spinning about on the splintery wooden floor - and always seemed to be the only one with a handle on the English (strine) language. What a laugh. AC/DC queen for an instant.

The thing is, I might dress like a skinny rock chick now, but Davide/Angus still doesn't know I was a hardcore Bee Gees fan in those years. AC/DC? Nope. I was such a disco snob.

So this is how it went. On Saturday night I had my disco nap and pulled on my jeans and walked up to the club where the guys were playing. My sons were there - hard Aussie/Veneto drinkers - as were a bunch of twenty-year-olds plus a few drunken goons in ski goggles. Most of my friends had hit the couch at home and didn't turn up. Argh! So I watched the musicians scream and head bash in the smoky air, the sound thumping through my heart, until they sang 'You Shook Me All Night Long' (an old fav) and I decided to bail out.

I spent the rest of the night half awake as people staggered into the apartment and fell into beds. Then my alarm went off and it was time to take Fin to ski training.

That is when I found myself standing there looking at the three sleeping rockers. As I looked at them I thought of my uneasiness on the edge of the young crowd that night. Too old to go clubbing? Maybe that night, that club - yeah. Then I remembered all the alcohol, all the crazy dancing, the hangovers, the naughtiness and dirty deeds of my own clubbing years. I remembered the sweating crowds and the delirium, the swollen feet...

And I felt relief. Hangover-free, I picked up my ski boots and we left the house.
Posted by The Divorced Lady's Companion to Living in Italy at 04:27