The End of Love: What if Anais Nin and Henry Miller had Skyped?

I had a thought. Young Diva Daughter (who doesn’t read this) spends much time with her Beloved on Skype. They are bewitched. Captivated. If not Skyping, they are furiously typing on whatsapp. Everything is short and furious and oh-so-immediate. No chafing at the postbox and ripping open envelopes with foreign stamps. No scribbled-on sheets of paper to clutch to the heart.
It makes me think of love letters. I mean Love Letters.
Did you ever write reams and scrolls and reams to your Beloved? Hell yeah. (And I didn’t pick up any of them online either.) Ahh, it’s going to sound very old-fashioned to say this, but Weren't Those The Days…
I honestly remember twenty-page intercontinental letters (the girl was verbose; and I couldn’t blog!) and I’m talking about twice a week. I remember notes scribbled after making love, when another Beloved had fallen asleep. The first thing he would read when he got up to go to work! Written with – yes! – a biro on paper. Bits of poems copied out (not copied and pasted). Queasy declarations in bad French or Italian. Collages of dumb photos.. metro tickets..
But mostly words words words. Written words where you had to get a flow going and edit yourself as you flew along (no auto-correct or spell-check or any form of self-editing). These words were raw and full of flight, they were scrawled high or crinkled in the corner, cramped along the sides of the page.
Do you remember? Do you remember word love? 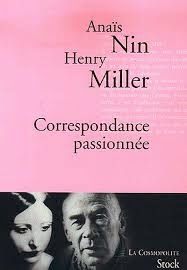 And now imagine this. Some of last century’s great lovers (or the most show-offy ones, probably) have just spent an amorous afternoon together. The man – the sexy/sleazy Henry Miller – rushes home to his poor digs and he logs on, and here is Henry looking worse for wear filling up Anais’ screen with his crooked bookshelves on the wall behind. Would we ever have been handed down words such as these to savour if Nin and Miller had skyped??

Don’t expect me to be sane any more. Don’t let’s be sensible. It was a marriage at Louveciennes – you can’t dispute it. I came away with pieces of you sticking to me; I am walking about, swimming, in an ocean of blood, your Andalusian blood, distilled and poisonous… You became a woman with me. I was almost terrified by it. You are not just thirty years old – you are a thousand years old… I read the paper about suicides and murders and I understand it all thoroughly. I feel murderous, suicidal. I feel somehow that it is a disgrace to do nothing, to just bide one’s time, to take it philosophically, to be sensible..

Quelle fever!
Now do yourself – and the Beloved – a favour. Get out your pen. Find some beautiful paper.


And write a Love Letter.
Posted by The Divorced Lady's Companion to Living in Italy at 08:46