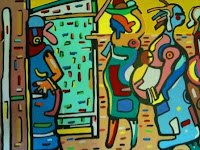 Her pensive, stylised face looks out from Picasso's seductive portraits.
Posted by The Divorced Lady's Companion to Living in Italy at 07:22